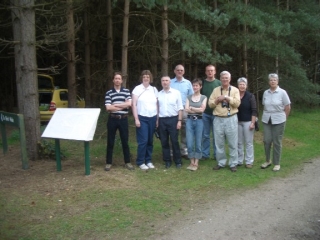 Friday May 12th 2006 saw a number of invited guests arrive at Mayday car park to celebrate the completion and reopening of the trail and a visit to the bird viewing screens FoTF had installed along the route.

The trail was opened by Nick Gibbons, recently retired Forestry England Conservation officer, who then led the invited guests on a guided walk around the new trail, stopping off at various places including the new screen, before returning to the start for well deserved picnic.

Please take the time to come and have a look - the walk is easy to follow, suitable for most people and there's lots to see on the way around, tangible evidence of how membership subscriptions help FoTF to improve facilities for everyone within Thetford Forest. 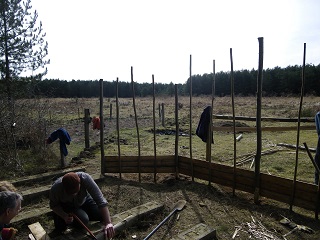 During 2010 FoTF Conservation made repeat visits to the Goshawk Trail at MayDay during the construction of a second bird hide screen. Previously, the FoTF Conservation had erected a pre-constructed bird screen, following preparation of the location.

The second screen was not only erected by FoTF Conservation, but was also built from scratch by FoTF Conservation. As well as clearing the site, the group had to install the core supporting structure and interweave the material to constrcut the screen.

In 2016 FoTF Conservation once again returned to the Goshawk Trail to replace the now aging screen and replace it with a new screen.. 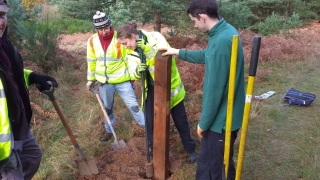 Following inspection by Forestry England and FoTF it was noted the Goshawk Trail has succumb to the elements and the marker posts and header board were showing signs of their age. As a result of this in late 2019 FoTF joined forced with Forestry England to undertake a program of work during late 2019 and 2020 to remedy the issues identified with planned work to include: