On Thursday 22nd May 2003, the 'official opening' took place of the restoration of Mildenhall Warren Lodge and the creation of a circular walk, with interpretation boards, around the former warren. There had been a rabbit warren at the site since the 1300s, one of over twenty in medieval Breckland where rabbits were farmed in designated areas for their meat and their fur. This warren lodge is one of only two surviving medieval warren lodge buildings in Breckland, the other being Thetford Warren Lodge.

Fund-raising by the Friends of Thetford Forest (FoTF) for this project began in the autumn of 1999 and resulted in £5,000 from Forest Heath District Council; £21,700 from English Heritage and £22,500 from the Heritage Lottery Fund. Work commenced on the Lodge in the Summer of 2002 following final confirmation and awarding of the grants in late Spring 2002. The work was finished in Winter 2002, with the offical opening in late Spring 2003.

Forestry England, the landowner, made significant 'in-kind' contributions, including the creation of a car park, way-marking the new walk and giving expert advice at all stages of the project. Mildenhall Warren Lodge post restoration

Members of FoTF undertook conservation work around the lodge itself, and along the walk, and helped with deciding the route the walk should take. As the project progressed, special walks were held to show the public the developments. Mildenhall Museum created a display of artefacts from the site together with copies of original documents relating to the warren. 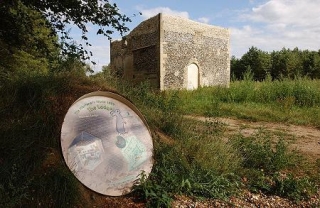 During the conservation work, the clunch wall of the nineteenth-century lean-to was discovered, revealing the brick floor and traces of its use as a wash-house, complete with soakaway.

The interpretation boards are based on the idea of 'The Warrener's World' and use the names of warrener's known from documentary research. They are mounted on specially constructed mounds to complement the warren banks still remaining in the landscape.

The first public 'Open Day' on 26th May 2003, resulted in over seventy visitors, including two people who knew the lodge when it was still occupied as a home.

Since the first opem day FoTF have continued to run annual open days, which conicide with the annual visit by the FoTF Conservation Group, to meet the public and educate them about the warren, the ongoing FoTF project at the warren, and other FoTF projects.

Friends of Thetford Forest has been contacted by Greg and Roslyn Koppenol who live in Australia. Roslyn is researching her family's history and has discovered that her great, great, great grandfather was Nathan Mysen (1779-1868) and that he was a warrener living at Mildenhall Warren Lodge, as recorded in the 1841 and 1851 Censuses. FoTF is very grateful to Greg and Roslyn for sending this information. 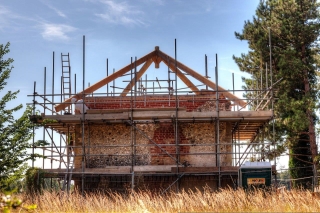 Recent harsh winters had badly affected the 600-year old Mildenhall Warren Lodge and in 2011 English Heritage placed it on the 'Heritage at Risk' Register. The Friend of Thetford Forest instigated a new project as a result of this, and in November 2011 was awarded grants totalling £80,000 from English Heritage and Forestry England (with a later contribution from Forest Heath District Council) to help conserve the Lodge.

Due to the registered status of the Lodge, FoTF needed to seek permission to undertake the restoration work, and in May 2012 Scheduled Monument Consent was given for repair and installation of a new roof, modelled on a photo of the 1930s. FoTF then appointed the architect Tim Buxbaum and Conservation Builders R J Hogg and Son to carry out the work.

in February 2013, Douglas Fir from the Public Forest Estate in East Anglia was felled for use in the construction of the timber frame for the roof. It was milled at a sawmill in Hevingham while the repair work to the lodge was started in April 2013. This work included strengthening the walls with a brick core encased in flint. In late August, the timber was transported to the site and the roof frame assembled, enabling the tiling to take place during October and November.

On the 4th December 2013, 40 guests, including Committee Members of FoTF, gathered to celebrate completion of the project and view the restored Warren Lodge, complete with its new roof.