In June 2017 Friends of Thetford Forest (FoTF) was extremely proud to announce that it has been given the Queen's Award for Voluntary Service. This is the highest honour a voluntary group can receive and reflects the outstanding contribution made by our volunteers, both past and present, to Thetford Forest.

This award reflects FoTFs volunteering efforts which includes conservation of wildlife habitats; researching and protecting archaeology and heritage; caring for Lynford Arboretum; inspecting the walking trails; carrying out a 'Meet and Greet' role at High Lodge Centre and helping at the concerts and special events. The volunteers who do all this contribute over three thousand, five hundred hours to the Forest each year, supported by a committee of six who are also volunteers.

It was the Forestry Commission, now Forestry England, Staff at the East District Office at Santon Downham who nominated Friends for the award. 'That was an honour in itself' said Chair Anne Mason 'and to actually be a recipient of the award is beyond anything we imagined. To have our voluntary work for Thetford Forest recognised in this way, with the highest acknowledgement any voluntary group can ever be given, is the most incredible achievement and reflects the dedicated work of all our volunteers'.

The granting of the Queen's Award for Voluntary Service to FoTF also generated coverage for FoTF in the local press, such as this article on the EDP24 website.

The Committee would like to thank all our volunteers who have made this award possible. 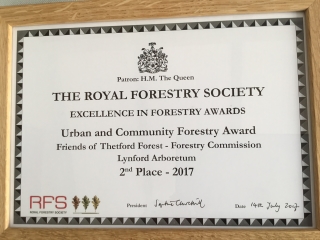 The RFS Urban and Community Forestry Award encourages and rewards projects involving urban and community woodlands which have been established and managed in a way which is sustainable and beneficial to the landscape, the local people, biodiversity and the economy in both the short and long term.

Judges described it as: "...probably the most unusual community woodland ever visited by the judges - and it is truly delightful." and they added: " The Friends are efficiently run, effective in their aims and have good governance which will guarantee a secure future. This is an outstanding success story brought about by an equally outstanding organisation which works closely with the Forestry Commission in a mutually beneficial manner."

Friends of Thetford Forest values its volunteers and the Forestry England needs the help and support of Friends' members. For more details please email volunteering@fotf.org.uk